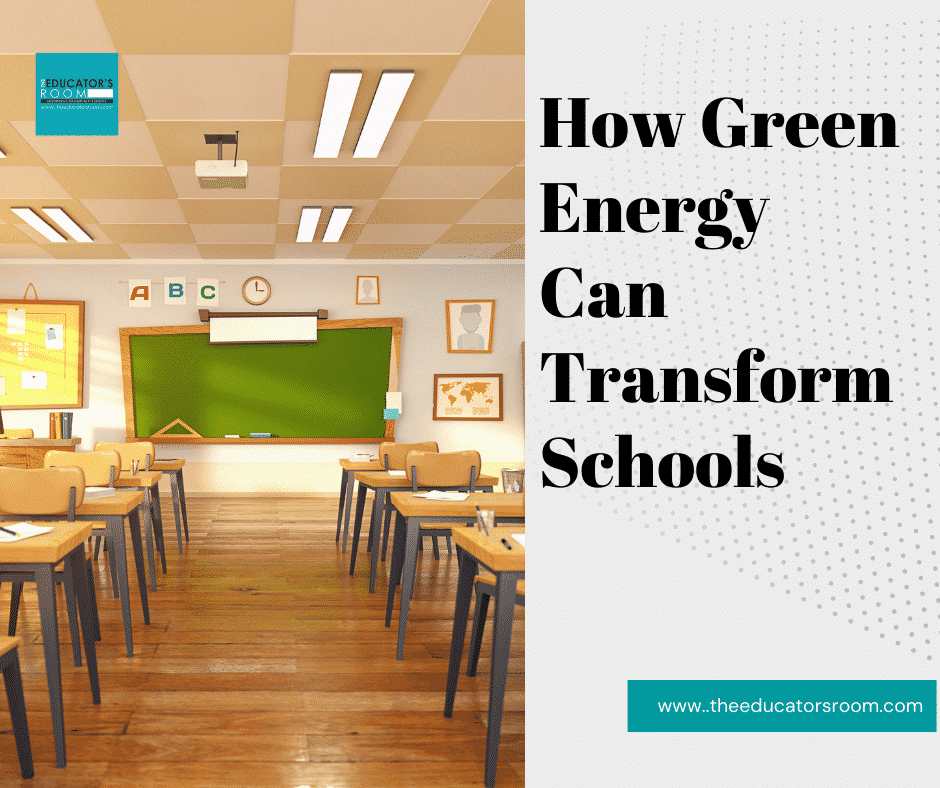 It’s Time to Bring Education Infrastructure into the 21st Century

Have you signed up for The Educator’s Room Daily Newsletter? Click here and support independent journalism!

We were living in Houston in February 2021 when a string of disastrous winter weather hit. We watched as the entire state slowly shut down over the course of a few days. Contrary to misinformation blaming green energy on the power failure, green energy kept my family’s lights and heat on. Our house was one of few in our neighborhood that did not endure over a week of power outages, frozen pipes, and collapsed ceilings once normal temperatures returned.

How did we escape needing to make phone calls to insurance companies after the state thawed out?

We had Tesla solar panels and powerwalls installed in October 2020. Less than four months later, we used them to keep our heat on.

The teacher in me could not help but wonder how we could transform education by investing in energy-independent infrastructure.

If we choose to invest in green energy, it will have a tremendous economic, environmental, and educational impact on our entire infrastructure. Here’s how it might work.

In 2017, the Batesville School District in Batesville, Arkansas, took a careful look at its energy audit and concluded that the district needed to make some changes. The six school district, which teaches 3200 students every year, installed 1400 solar panels at the high school and replaced windows, lights, and HVAC systems.

The school district left behind a $250,000 deficit, accumulated a $1.8 million surplus, and increased teacher pay by an average of $2000 to $3000 per teacher. And the district’s decision had a ripple effect; at least 20 local school districts are following their model.

According to the 2020 Brighter Future report, over 7,000 US schools–5.5% of all public and private schools–are now powered with solar panels. The Batesville district received their funds to install solar through a local bond initiative, but many more school districts around the country use programs that allow local companies to install and maintain solar arrays, paying the companies for the energy used instead of paying for the full cost of panels upfront.

Installing solar doesn’t just decrease school electricity bills. It can decrease a school’s carbon footprint by more than 28%, serve as hands-on STEM learning for students, and take considerable pressure off the local power grid. The financial, educational, and ecological benefits are many, making solar panels a worthwhile investment in most school districts across the United States.

I first became fascinated by the concept of living roofs when my husband and I visited the Maker’s Mark distillery in Loretto, Kentucky. One of their newest buildings sports a roof completely covered in lush vegetation, which plays a significant role in lowering the heating and cooling costs of the building.

I immediately started wondering how schools could use the same idea to simultaneously save on energy and teach students about ecology.

According to Living Architecture Monitor, “A green roof is a layer of vegetation planted in engineered growing media over a drainage layer, filter cloth, and root-repellent and waterproofing system on a roof.” Most teachers have seen their fair share of leaking roofs over the years, so it seems counterintuitive that a growing ecosystem on top of a school building would actually improve the infrastructure of a school’s roof. However, several studies have shown that living roofs nearly double the lifespan of rooftops, reduce energy costs, and prolong the lifespan of building HVAC systems.

And the benefits reach far beyond infrastructure.

Living roofs can provide schools with hands-on biology and agriculture lessons, provide produce for the school and community, serve as a habitat for birds and bees, improve local air quality and storm-water management, and upgrade the natural aesthetic of neighborhoods.

While a newer architectural concept, living roofs are an improvement that can positively impact both schools and the communities they serve.

“Infrastructure improvements are about investing in the future, and our schools are a significant part of that.” – @sstyfwrites How Green Energy Can Transform Schools Click To Tweet

Windmill technology has come a long way, evidenced by the growing number of wind farms stretching across the country. Schools that might not benefit from solar energy can still pursue green technology by partnering with companies and programs to install small wind turbines intended to power a small number of buildings instead of whole communities. Although it is not as widespread as solar programs, the U.S. Department of Energy has implemented a Wind for Schools program that has installed 145 systems across 12 states. While the implementation of wind energy is more challenging than solar, it is another option that helps to reduce carbon footprint and save money over time.

Schools can also improve energy usage by installing geothermal systems that use the earth’s natural below-ground temperature to heat and cool buildings. These systems use significantly less energy, are less noisy, and tend to maintain a more consistent temperature. The systems also improve air quality inside school buildings, which has become an increased concern in the age of COVID. When a school district in Illinois changed out aging systems with geothermal, teachers noticed that students were healthier and more alert as a result of the improved indoor environment. When paired with lower energy costs, the benefits far outweigh any costs.

Infrastructure improvements are about investing in the future, and our schools are a significant part of that.

Going green isn’t about giving things up; it’s about learning how responsible living and innovation can help us live better. As educators, we are preparing our students for global citizenship. We can, and should, be using the buildings in which they are learning daily lessons for how to be the best citizens they can be.

Editor’s Note: If you enjoyed this article, please become a Patreon supporter by clicking here.