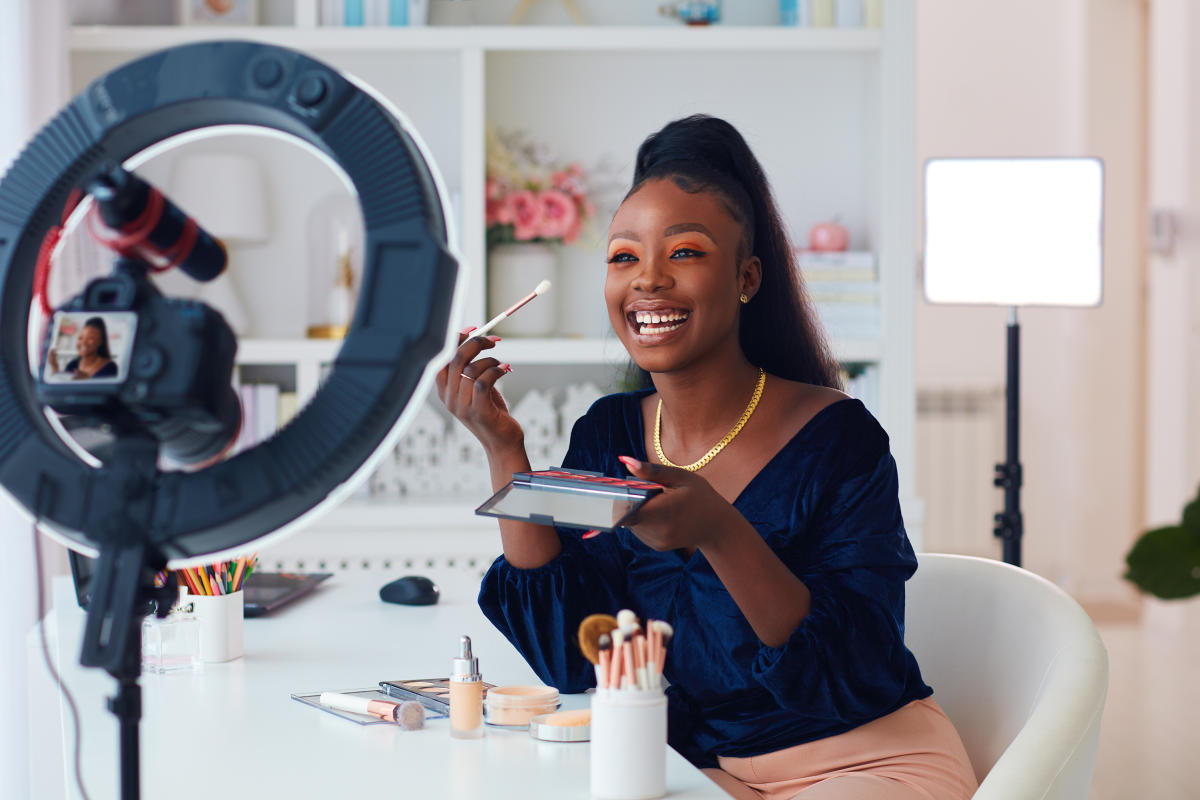 The conversation about Black content creators being underappreciated online became a mainstream conversation in 2020 with the rise of the Black Lives Matter movement, which put a spotlight on the voices of people of color on social media platforms like TikTok, Instagram and YouTube. During that time, Black influencers saw a spike in engagement and following as people were directed to their content through initiatives like #BlackoutTuesday — a day when people across multiple social networking platforms were encouraged to mute their own content to bring attention and awareness to Black creators, influencers and educators.

At that time, the lack of inclusivity on the internet was highlighted for what felt like the very first time. But even after bearing the burden of sudden exposure followed by a duty to educate, Black creators continue to miss out on the credit, opportunities and equity that they deserve after driving popular trends that others are cashing in on.

“The issue is how we are indoctrinated to value Black labor,” Conscious Lee, a Black content creator and educator tells Yahoo Life. “There’s an issue with fungibility of Black people’s labor throughout the Western world and social media created a new realm within our reality to make it worse.”

Although discussions around the topic have bubbled up over the past few years, a Forbes list of TikTok’s highest paid creators, released in January 2022, confirmed that the issue persists. Among the top five biggest earners were both Charli and Dixie D’Amelio, Addison Rae and Josh Richards, with the only person of color being Bella Poarch — despite the platform being chock full of trends originated by Black creators.

Lee points out that this isn’t dissimilar to how racism functions outside of social media.

“Black folks throughout the history of the Western world, not just America, have always been talking about being valued as producers — not just valuing our productions. In the community and all over America, we always say ‘they love Black culture but do not love Black people,'” he explains.

Attempts to support the development of Black content creators

During the summer of 2020, some social media platforms began to recognize that latter sentiment and attempted to address the issue with statements in support of Black content creators, as well as funds dedicated to supporting their growth.

By 2021, Meta, the technology company formerly known as Facebook, along with YouTube and TikTok, all launched specific programs aimed to invest in Black creators on their platforms. Lee says that the move was a necessity in order to disrupt the status quo.

“If we recognize there is a lack of access to a particular group or we recognize that a particular group is excluded from an institution or excluded from an experience, that’s the reason why we place incentives on different programs to literally try to subsidize or overcompensate for how people have been excluded,” he explains. “If we acknowledge that white cisgender able-bodied people in social media because of the status quo get more access, it makes sense for us to create programs that give Black trans people or Black people or disabled people, indigenous people, also access to those spaces.”

The heads of Facebook and Instagram, both under Meta, initially announced a collective $300 million investment in Black-owned businesses and creators back in June 2020. The company later launched the We the Culture program in 2021, which is said to “empower and promote agency to creators and the Black community by providing them the tools and platform to elevate their profiles, and enable them to create sustainable economic opportunities for the long term.”

TikTok followed with a Black Creatives Incubator Program, announced in Jan. 2021 in partnership with MACRO — a global media brand driven by people of color telling stories of universal themes that inspire and connect. The program was said to focus on “nurturing and developing 100 talented Black creators and music artists,” according to a TikTok spokesperson. The MACRO x TikTok Black Creatives Grant announced in Nov. 2021 selected 10 creators to receive $50,000 each, plus “personalized coaching from MACRO to help bring their dream project to life, whether it be in the form of a book, movie, TV show, radio show, or another content medium.”

YouTube similarly announced its #YouTubeBlack Voices Fund in 2020, followed by the inaugural Creator Class of 2021. The first class included 133 creators from around the world who were offered “dedicated partner support, seed funding invested into the development of their channels, and participation in an intensive development program that will focus on training in production, community engagement and wellbeing, followed by ongoing workshops and networking programs.”

Lee is now one of 135 creators who are part of the #YouTubeBlack Voices Creator Class of 2022. His predecessors include a YouTube gamer who goes by AyChristine. She tells Yahoo Life that while her participation in the program can’t be quantified in numbers of subscribers or video views, she did gain a lot of respect for how the platform was addressing the ingrained issues.

“I’m not going to say that everything’s absolutely perfect, but the opportunities to provide feedback that they give you, especially even in this program to kind of break down everything that they have been doing on the platform and asking for feedback and guidance, because they really are actively trying to shift and make changes. I mean, it’s not anything that they have to do, right?” she says.

“[The platform] doesn’t have to actually pay us to do YouTube, right? When you make money from posting your videos and things like that, no platform actually has to pay you, they could just say in their terms and conditions, ‘Hey, you could put your videos here, but we own it, and we run ads, but you don’t get any money from it.’ That’s what they could do,” she says. “But the effort and time and resources that they have taken to actually fix things and ask us for feedback and how to change things, the steps that they’ve taken … I was telling them like, honestly, I feel spoiled.”

Hopes for the future

Lee points out that outside of the platform’s efforts to better integrate Black creators, there are still issues within the system of content creation, namely that it depends on platforms to determine a creator’s worth rather than the creator doing that themselves. Ultimately, algorithms hold the key to an individual’s success and they’re, by many accounts, biased and work against most creators of color.

The future that he hopes for includes a “decentralized” model in which creators don’t have to depend on those platforms and their algorithms to display their content and monetize it. Instead, subscription-based content will allow creators to determine their worth and receive compensation for their content from those who want to see it.

“Where virtual reality is going, where the internet is going, it’s all about content creators being able to control how we make money and control our value. Going into subscriptions means I don’t have to rely on a promotion or advertisement from a random company to put the money in my pocket,” he explains. “It’s important that content creators be able to have more control over what we create and how we create value. Subscriptions gonna be able to do that because now I get to have a personal relationship with my followers and we get to talk about how much a subscription is to use.”

Platforms like OnlyFans and Patreon already work under this model, as well as the social media app Fanbase, where Lee is on the “Future of Fanbase” Creator Advisory Board. And while it is important for all creators to determine their worth, it is of the utmost importance for Black creators who continue to get shut out of exposure, and opportunities where they’re already creating.

“A side effect of algorithms on any platform is that their core goal is to keep you on the platform longer. So if you are watching certain creators and that is who you were drawn to for whatever reason, and that is who you watch the most naturally, any algorithm is going to push more of that to you,” Christine explains, noting that depending on a platform for exposure as a niche Black gamer is nearly impossible. “If you’re mostly watching white creators or white TikTokers or white Instagramers, they’re going to show more of that to you. Keywords and things can play a difference in maybe you stumbling upon a Black person, but there’s a lot of layers.”

Aside from Christine’s participation in the #YouTubeBlack Voices Creator Class of 2021, the gamer has made numerous efforts on her own to get the exposure and recognition that she deserves after being on the platform for seven years — including launching two additional channels, creating a podcast and collaborating with other Black creators in her field. This alone goes to show that “everybody’s labor isn’t valued the same,” as Lee says.

More importantly, however, Christine also gained new perspective on why she continues to create.

“When I started the mission was to make people laugh and smile. This is also a way for me to showcase my personality,” she says. “But then in the midst of 2020, the shift for me has become normalizing Black faces in the realm of media gaming and tech.”

While representation remains important for the Black community, Lee speaks to the necessity of creators, users and platforms focusing more on resources, education and equity on social media and how it relates to real progress in the much larger fight against racism and discrimination.

“I recognize that if you put what’s going on with Black content creators in a vacuum, you’re not going to be able to account for the full picture of how we are devalued, how we are marginalized and how it is rationalized throughout history to extract value from Black folks,” he says. “As a Black man in 2022 I’m able to dictate my time, dictate when I want to work, when I don’t want to work, when I want to post or I don’t want to post. That power now is going to be in our hands. In many different ways, my parents and my grandparents couldn’t fathom a lot of the access that I have right now.”

Want lifestyle and wellness news delivered to your inbox? Sign up here for Yahoo Life’s newsletter.